Jamyang Norbu, a 2019 pass out student of BFTP of School of Film & Media Sciences from Bhutan qualified in the Bhutan Civil Service Examination in 9th Rank. Subhransu Satpathy, a 3rd year student of KIIT School of Film & Media Sciences, loves nature.  He is the first Odia to feature in the prestigious list of freelance cameramen at Wildlife-film.com, The International  News and Information Resource for Wildlife Film-makers.  Earlier Subhransu had also won an award for “Best Film” at Basudha – a National Level Art and Film Festival that was organized a few days ago in Bhubaneswar. 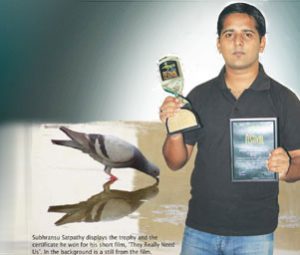 Subhransu Satpathy, a 3rd year student of KIIT School of Film & Media Sciences, loves nature. His passion and his skill in film making won him an award for “Best Film” at Basudha – a National Level Art and Film Festival that was organized a few days ago in Bhubaneswar. Student’s Filmmakers of India also awarded him the best cinematography award for his short-film ‘They Really Need Us’. It depicts the plight of birds in summer.

His movie has a message for viewers and tells them to keep a bowl of water in an open space such as in balconies and gardens so that birds can quench their thirst. The movie suggests making small reservoirs for birds so that they can bathe in hot weather conditions. Subhransu is a film-making student at KIIT, a wildlife photographer and an e-volunteer for World Wildlife fund (WWF) and Global Oneness Project.

“My father was a forest officer so I spent my childhood in many forests and sanctuaries of the State. I developed a close relation with nature. The present condition of birds in cities is palpable and worsening every year. That is why I decided to make a short film on this subject. Many species of birds have become extinct and several others are on the verge of extinction.

“The motto of making this short film was to create awareness among people about the need to save these little creatures. I will be more than happy if my movie impels viewers to do something for the welfare of birds and other wildlife,” said Satpathy.

He believes that films are the best medium to spread awareness on wildlife because it gives a voice to voiceless creatures. He says that he will make films on wildlife which can help in conservation and he will try to Broadcast them on BBC, Discovery and National Geographic channels.